Looking more like a livestock carrier than a boxship， Maersk yesterday unveiled its brand new design for its next generation of green ships. 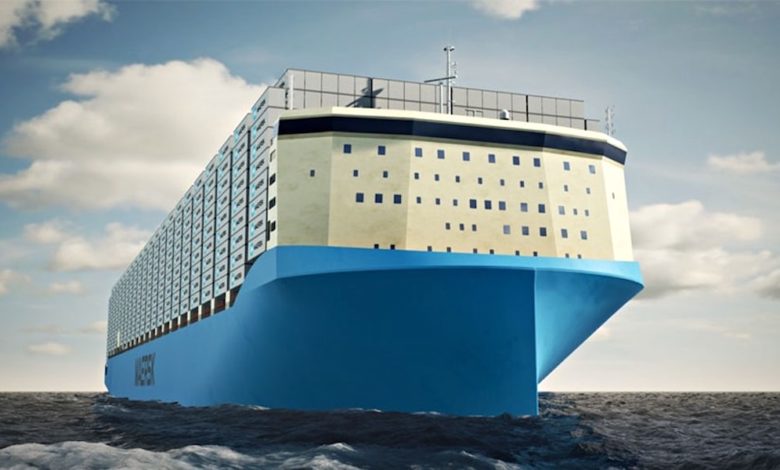 Intended to sail on green methanol with 16，000 TEU of capacity， 350 m in length and a new look for container vessels， Maersk’s groundbreaking new series of eight ships will deliver from Hyundai Heavy Industries in 2024.

The design allows a 20% improved energy efficiency per transported container， when comparing to the industry average for vessels in this size， Maersk claimed yesterday. Additionally， the entire series is expected to save around 1m tons of annual CO2 emissions， offering customers carbon-neutral transportation at scale on ocean trades.

The crew accommodation and bridge will be located at the bow to enable increased container capacity.

New arrangements for lifeboats and navigational lights have been developed， plus new cameras to support the captain’s view when navigating.

The funnel will be in the aft， and only on one side of the vessel， thereby providing further space for cargo. This separation between accommodation and funnel will improve efficiency when at the port， Maersk suggested.

The series， classed by ABS， comes with a dual-fuel engine setup that can operate on methanol and conventional low-sulphur fuel.

As well as the eight 16，000 TEU ships， Maersk also has a 2，000 TEU feeder vessel under construction， which will run on methanol too.

Maersk has a history of introducing groundbreaking ship designs into the liner trades， such as its orders a decade ago for its EEE class of ships， ushering in the supersized， 18，000+ TEU era of container shipping.